Agra city is packed with awesome architectural wonders, and what is more, this has one of the most popular heritage sites, the Taj Mahal. The city also has Agra Fort, Itimad-Ud-Daulah Tomb which is popularly known as the “Baby Taj” as it looks similar to the Taj but in smaller size. The Tomb of Itimad-Ud-Daulah is a very ornate edifice that’s viewed as Taj’s impending precursor as far as inlay works and elaborate carvings are concerned. The tomb is also very different from the other Mughal dynasty tombs that were built before its construction.

The wife of Mughal emperor Jahangir, Nur Jahan built this in memory of his loving father, Mirza Ghiyas Beg who was honored with the title of Itimad-ud-daulah (Pillar of the Government) by the emperor himself. That was the time of making building with red stones when it has constructed between 1622-1628 with white marble. So people belive that it has inspired the architecture of Taj Mahal and started calling it “Baby Taj Mahal” which is one of the reasons of its popularity among tourists.

The elaborately carved and the pure white Itimad-Ud-Daulah Tomb conform to the architecture style of Islam. Using minarets or octagonal-shaped towers, the use of floral patterns that are carved exquisitely, intricate works on marble screen, and inlay work all represent the Islamic style. Presence of closed kiosk on top of the building and absence of a domeand also the use of chhatris or the small doomed canopy supported by pillars atop 4 towers or minarets rather than proper domes are said to be the reflections of the local influence. 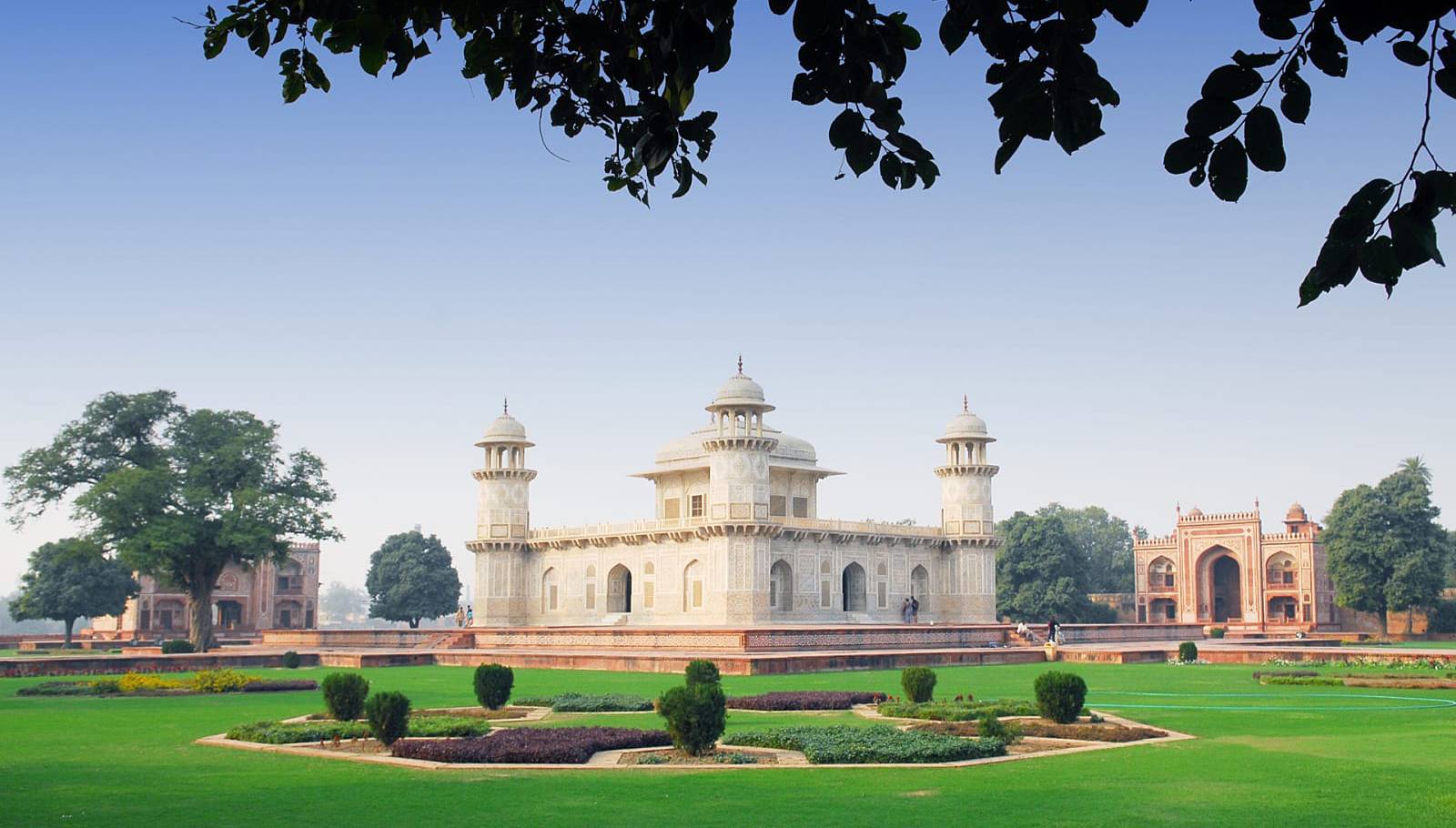 The Tomb’s architectural designs depicts Persian influences into the Islamic style architecture. A similar style was eventually adopted by numerous structures in the city, even the well-known Taj Mahal. The main elements of the tomb include pietra dura decoration styles, use of semi-precious stones, geometric structures, flora motifs and trees together with in-laid unique stone works all through the interiors and surfaces of the famous structure.

The Tomb is crafted from white marbles and positioned on a large platform, which is made of red sandstone. This can be easily accessed through the four monumental entries. The tomb’s inner space is actually divided among nine chambers, the largest chamber in the Central Chamber, which is only accessible from the southern side. You can find cypress trees and floral decorations into the walls giving off some Persian architecture essence.

The Itimad-Ud-Daulah’s Tomb is said to be as meaningful and interesting as the life of the individual for whom this tomb was actually built. Itimad-Ud-Daulah was actually buried in a tomb that looks like a jewel box and then set into the garden. This small and tranquil garden situated in the Yamuna banks has inspired the construction of the Taj Mahal in later years.

This is the very first tomb found in India that is completely built using white marble. Profusions of highly intricate works done in the marble and the beautiful screen works are the major factors that make Itimad-Ud-Daulah Tomb one of the veritable forerunners of the ever famous and beautiful Taj Mahal.

Visiting the Tomb is one of the interesting things you should not miss. This place will not just remind you about the rich history of its creation but also provides you with a lot of interesting information about its architecture, designs and many more. Tomb of Itimad-Ud-Daulah is one of the major structures that also made the city of Agra well known.

The tomb remain open from Sunrise to Sunset on all week days so don’t worry Itimad-Ud-Daulah Timings. You have to take off your shoes before entering into the main mausoleum. Itimad-Ud-Daulah Entry Fee is very nominal for Indians and SAARC / BIMSTEC citizens which is only Rs. 30 per adult. But Itimad-Ud-Daulah Ticket Price for foreigners is Rs. 310 per adult person. You won’t need to buy tickets for children below 15 years of age.

Best time to visit the tomb is in winters as summers are very harse in Agra and other parts of northern India. Itimad-Ud-Daulah Distance From Taj Mahal is only 6.7 Kilometers and you can reach there within 15-20 minutes by road. Local transport is hardly available so better to hire a taxi or auto rickshaw to avoid problems.