When it comes to visiting forts and palaces, no other names strike to our mind except India that boasts countless of majestic forts and embellished palaces that are scattered in across the country. Some of them have been scripted on the list of UNESCO world heritage sites like Red Fort in Delhi, Agra Fort in Agra, Mehrangarh Fort in Jodhpur, Amer Fort in Jaipur, Golden Fort in Jaisalmer, Chittorgargh fort in Chittorgargh etc. all these forts display royalty and ingenuity of bygone era kings and princes which we have treasured as their legacy. Many of them have been converted into luxury hotels which help their descendents to generate revenue. In order to provide you an idea of India's forts, here is a list of 10 most impressive forts which must be in your bucket list.

Commissioned by 5th Mughal ruler Shah Jahan in 1638 after being deprived by the death of his beloved wife Mumtaj. The Red Fort consists of many mesmerizing palaces, gardens, diwan-I-Am, Diwan-I-Khas, Museum, Mosque, etc. some part of the forts have been demolished by the British in 1857 and converted it into garrison. The impregnable wall which is surrounded by Moat used to be filled with water, provides invincible security to it.  It served as a capital of India as well as a home of last Mughal ruler. It has been a perfect place to get a glimpse of Mughal and Indo-Persian architecture here.

Akbar, 3rd Mughal ruler, laid the foundation of this fort in 1565 by appointing Mir Kasim as a chief architect. During the reign of Akbar, Mughal architecture gained prominence in Agra.  Later on, most other palaces within the fort were added by its successors. It is a massive and well-planned fort, which can make its enemies bite the dust. However, local Jat ruler, Maharaja Surajmal captured Red Fort of Agra in 1761 and controlled until 1774. Later on, Mahadaji Shindi conquered the fort in 1785 and remained in his possession until 1803 was replaced by the British. In 1983, the fort again came into limelight by being placed on the list of UNESCO World Heritage Site. Since, it has been one of the most tourists visited forts of India. 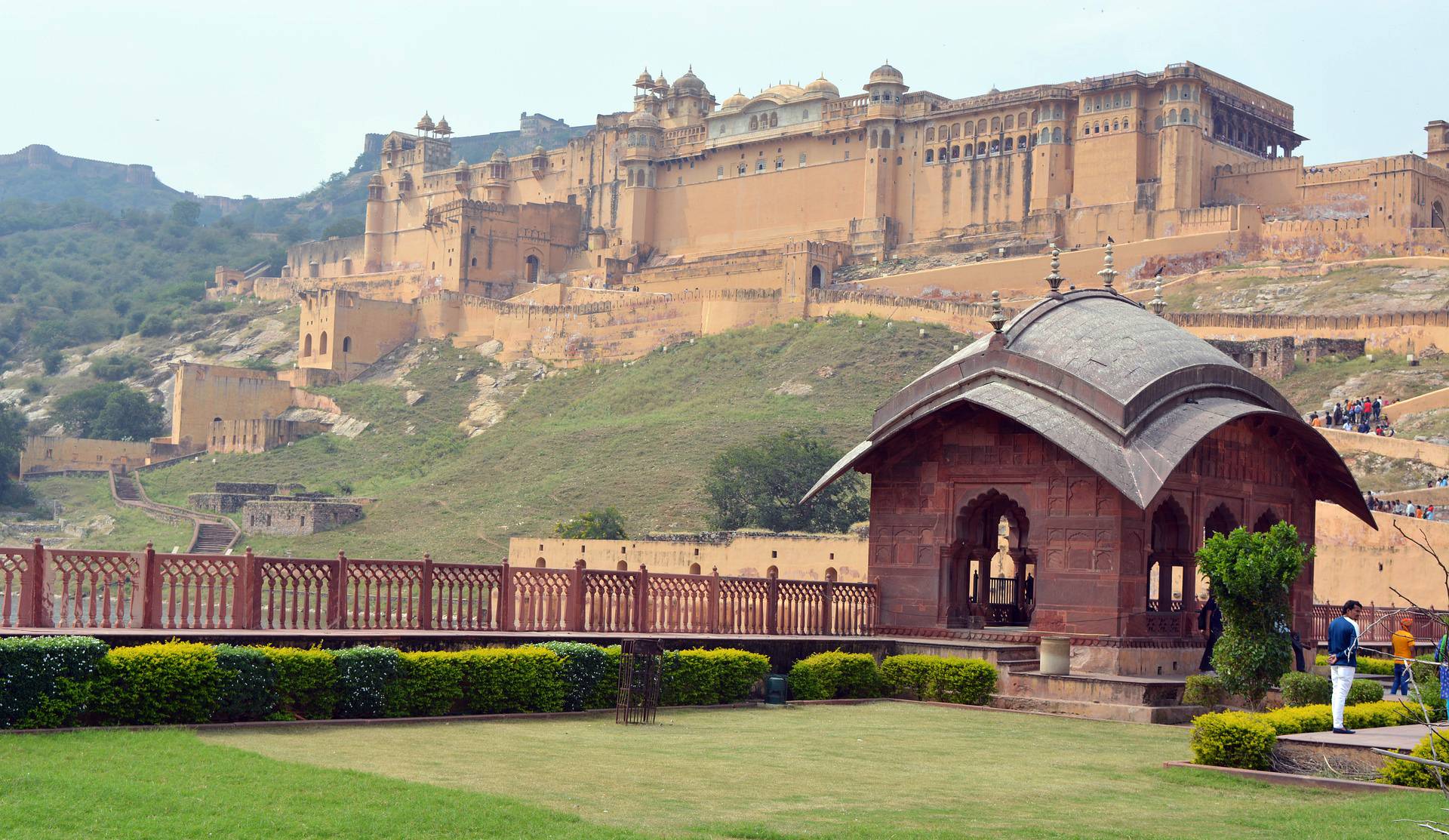 Situated Jaipur in Rajasthan built by Kachawaha rulers, Raja Man Singh, a few more places within this fort were added by Sawai Jai Singh located on hill top. It used to be a capital of its kingdom. This is a perfect place to visit and get to know about their regal life style of Rajput rulers of Amber which is a blend of Indian and Islamic architecture. It sprawls over an area of 4 square km. it consists of many worth-visiting palaces, including Diwan-i-Aam, Diwan-i-Khas, Sheesh Mahal (mirror palace), Sukh Niwas, Jai Mandir etc. It has been a perfect place for the history lovers, archeologists and students to know.

The well-fortified fort built by Qutub Shahi Dynasty between 1512 and 1687 is situated in Telangana in the vicinity of Kollur diamond mines of India which used to be a home of many prominent diamonds like Koh-I-Noor owned by British, the blue hope owned by United states, Daria-i-Noor by Iran, many more prominent diamonds. It served as a capital of Qutb Shahi dynasty until 1590, subsequently the capital was moved from here to Hyderabad. The fort boasts many astonishing marvels within it ,including with a number of apartments, mosques, stables, eight mighty doorways with four draw bridges etc. one of the most amazing things which is experienced by tourists is that its acoustic effect at Fateh Darwaza. It sprawls over an area of 10 square KM.

Nestled in Old Kangra and is said to be one of the oldest forts in the world built by ruler of the Kangra. It is located at the confluence of the Mahji and Banganga rivers in the valley of Kangra in Himachal Pradesh, moreover, it is also known as a largest fort in the Himalayas. The journey of this fort is breath-taking for the visitors which go seeing the natural beauty is surrounded by Himalayas.

Panhala Fort associated with the great Maratha ruler, Shivaji who made this fort his governing seat, it means a capital of his state which remains until 1782 and went into the hands of British in 1827. Nestled over a pass in the Sahyadri mountain range near Kolhapur. Attractions within this fort are Teen Darwaza, Sambhaji temple, the Someshwar temple, and Raj Dindi. On account of these reasons, it has been one of the most prominent forts in Maharashtra.

The fort served as a capital of its kingdom and used to be a home of many great Rajput rulers in which one leading name is Maharana Pratap. It is surrounded by second largest walls in the world after a great wall of China built by Maharana Kumbha in 15th century where from its name is derived. It has been enlisted on the list of UNESCO World Heritage Site. The fort hosts the Jauhar Mela which was performed by Rajput women many a time in past to save their chastity. Owing to its architecture, it makes travelers enthralled and makes them realize to their architectural skills.

Nestled in the heart of the Thar Desert built by Raja Rai Singh during his reign from 1571 to 1612. It earlier used to be known as a Chintamani, now it has been renamed to Junagarh Fort. It consists of many embellished palaces, audience halls, pavilions, royal ladies quarters, two historical museum boast many captivating memorabilia and artifact, etc. At present, their descendents moved to Lal Gargh Place which is situated outside of the fort.

Jaisalmer Fort is known as golden fort of India, named after color of stone. Rawal Jaisal built this fort, one of the oldest forts in the state of Rajasthan in 1156. It is one of the largest living forts in India. a significant percentage of population still resides in this fort. It is surrounded by the Thar Desert.  It consists of many palaces, Havelis, temple especially jain temples, Tazia tower, etc. it is known as impressive and majestic fort of India.

Rao Jodha laid the foundation of this fort in 1459 and moved his capital from Mandore to Mehrangarh Fort, who belonged to Rathore clan. it is situated on a hill top which used to a home of saint Cheeria Nathji who was forced to leave this place , in return he cursed that there would be scarcity of water. to prevent this curse from falling upon, a live man was buried who volunteered himself in return for his family will be taken care by rathore rulers. Royal descendents still lives in it. The fort is impressive and majestic that can mesmerize any visitors easily. Rudyard Kipling, dramatist, poet, said about the fort that has been built by angels.

Rate Your Experience!
[ Ratings: 5 From 1 Visitors ]
Top 10 Majestic And Stunning Forts In India