The Taj Mahal is one of the best mausoleums of all times. It is a monument built with ivory-white marble located in Agra, Uttar Pradesh. It has made India proud by making a room in the Seven Wonders of the World several times. Millions of tourists are allured by its beauty and glory. The Taj Mahal History has its own interesting story behind its inspiration and construction. For all curious minds, here is a description about the monument. Come, let’s have a walk through the Taj Mahal History in English with most of the details.

In the sixteenth century, the tomb was built by a Mughal Emperor Shah Jahan (son of Mughal Emperor Jahangir), for his wife as a tribute to her after her demise. Shah Jahan, at the age of 14, married a Persian princess, Mumtaz Mahal. He had many wives but was intensely in love with Mumtaz and she too returned the same. Mumtaz was known for her mesmerizing beauty and grace. In 1632, unfortunately, after giving birth to their 14th child, a baby girl, (who was later named as Jahanara) Mumtaz Mahal passed away.

The last wish to Shah Jahan was, he would not marry again and would build a palace (Mahal) as an essence of their infinite love. It was the same year when Shah Jahan started building the monument for his beloved wife. Let’s move further in the Taj Mahal History and see what happen next in time. 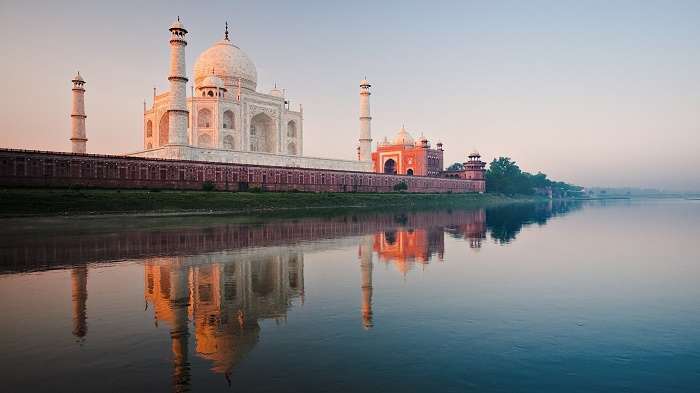 The construction of The Taj Mahal took many years. Several laborers, masons, artisans, inlayers, painters, stone-cutters and calligraphers were called from not only different parts of the country but also from all over Asia and Iran. Around 22000 laborers worked extremely hard for making this white castle. Most of the white marble was brought from Rajasthan, India. The construction was completed in 1653 as mentioned in the history. It is said that after the construction Shah Jahan had cut the hands of all the laborers so that they cannot make such a beautiful monument again.

Shah Jahan had for sons, among whom was Auarangzeb. Shah Jahan wanted his eldest son to become his heir but Aurangzeb, in the greed of the thrown, overthrew and imprisoned Shah Jahan and had a conflict with his brothers for the sake of the thrown. Shah Jahan could not bear all this and died in 1666 as per the history records. Then, he was also buried alongside of Mumtaz Mahal under the dome of the palace. Taj Mahal History does not ends here, let see what happen during the British rule in India.

Moving down in the history, in 1908, Viceroy Lord Curzon under restoration project had sent his soldiers to mold out all the precious and semi-precious stones from the walls of Taj Mahal. The gardens you see around the Taj were redesigned in British style during that time, they are not the same as was earlier. Later on in 1941, there was an Indo-Pak war. The Taj was scaffolded with sheets during the war in order to prevent the shine and brightness of it.

Being affected from pollution and acid rain, The Taj Mahal still manages to maintain its whiteness and grace just as it was centuries ago. It has proved to be the best illustration of beauty and elegance and is the symbol of boundless love, The True Love. Here we end the Taj Mahal History in English, let us know if you know anything that can be added here.